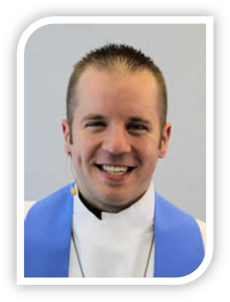 ​
The Reverend Benjamin Aaron Dolby
Pastor Ben was born in 1981 in Portsmouth, VA, to Greg and Mary Ann Dolby. He is the oldest of five children and spent the majority of his childhood in Hamlin, NY.  Pastor Ben was baptized and confirmed at St. John Lutheran Church in Hamlin, NY. He graduated from Roberts Wesleyan College Rochester, NY, in 2003 and completed seminary course work at Concordia Seminary in St. Louis, MO, in 2008.  His first Call out of Seminary was to Resurrection Lutheran Church and School in Newport News, VA, from July of 2008 through June 14, 2015.

Pastor Ben married Kristin in 2008. Kristin graduated from Concordia St. Paul, MN, as a Director of Christian Education with a Family Life Certification. She is currently working as a stay-at-home mom. Pastor Ben and Kristin are proud parents of two children.  The Dolby family is “owned” by their chocolate lab, Miles.

Pastor Ben loves all competitive sports and is eclectic in the teams he cheers for.  His favorite sport is football and he is a die-hard Carolina Panthers fan.  He looks forward to every discussion about theology and our Lutheran heritage because it reminds him of how much he still has to learn, even as he asks others, “What do you believe and why do you believe it?”

Pastor Ben is an unashamed geek ready to play all sorts of board games (i.e. RISK and Diplomacy), card games, and video games, when time permits.  He also looks forward to sharing J.R.R. Tolkien’s fictional Middle Earth with anyone he befriends after he’s shared the Gospel of Jesus Christ with them for free.  While sports, video games and hobbits are wonderful hobbies, Pastor Ben’s favorite way to spend time is chasing his son and daughter around the living room or back yard.  Money cannot buy the joy of being with the family God gives us!

Pastor Ben is eager, humbled and thankful to serve alongside the people of King of Kings in our efforts to reach the lost with the Good News of Jesus Christ from now until Kingdom Come.